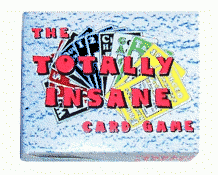 Player Reviews
"Please rush me (3) decks of Totally Insane... My neighbors are driving me nuts... They keep coming over, eating and drinking all my food, and demanding to play Totally Insane... One game lasted until 5 AM!!!

Best regards,
Pasadena, MD
"EXTREMELY addicting, insanely twisted version of UNO®. Many extra word cards that will leave you close to the rules. However, this is probably THE most enjoyable card game I have played with friends. Wonderful twists and turns never leave us board."

"Totally Insane is the funnest most creative game we've ever played"

"Totally Insane is so fun, it is addictive"

To Order your own Totally Insane Game: